SOGI Students on Our Campus: What do we do? 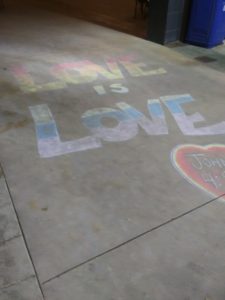 SOGI Students on our Campus? This was recently found on the sidewalk at Azusa Pacific University.

They may have come from your church and may have chosen your school because it is a Christian campus.  We hear more and more about Sexual Orientation Gender Identity (SOGI) issues.  We think that issue is somewhere else, until we have to ask, “How did we get SOGI students on our campus?”

Think about Johnny. Growing up in church, he got saved in vacation Bible school — three years in a row.  Around age 13, he is horrified to realize that instead of having the wild attraction his friends have for girls, he doesn’t. Even more disturbing to him, he is attracted to those same friends. He believes the Bible, prays every night for God to fix him, is afraid to tell his parents, and certainly does not tell anyone at church. As a teenager, he is sure he is going to hell.

He struggles with identity issues: “Do I fit with the gay community or the Christian community?“ he wonders. Wanting to walk with God, he chooses to go to a Christian college. But, as a young adult, he is lonely. He does not embrace a gay identity or hang out where the gay community gathers. He goes to church, reads the Bible at home, tithes, volunteers, and does not act on his same-sex desires. But he is a prisoner of his private shame, a shame he carries alone, a shame that cripples and isolates him till he becomes vulnerable to visiting the places where the gay community offers him a warm welcome.

They are here.  In fact, enough of them are here on our campuses, that InterVarsity Press has recently released Listening to Sexual Minorities: A Study of Faith and Sexual Identity on Christian College Campuses.[i]  What do we do?

First, recognize not all SOGIs are the same.  Some are activists who want to force impossible compromises on schools with a Christian mission. Some are Johnny. We need to develop appropriate responses to both.

Additionally, we need to recognize our duty to teach a Christian worldview on SOGI issues to young adults. They look like the world. From the Barna Group, we learn that the “research shows that people’s moral profile is more likely to resemble that of their peer group than it is to take shape around the tenets of a person’s faith.”

Since “almost half of [Baby] Busters believed that sexual relationships between people of the same sex are acceptable,” [ii] ignoring this steamroller of an issue means we will graduate students who will look like the world concerning this issue. 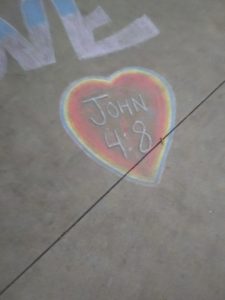 Note that this attempt to show the Bible affirms homosexual love contains two errors:  1) The correct reference is not in the Book of John (i.e., John 4:8), but the Book of First John (i.e., 1 John 4:8) and 2) the Greek word translated here as love is not eros (sexual passion) or phileo (companionship, deep friendship), but agape (selfless and sacrificial love as exemplified by the Lord on the cross).  It is unlikely the chalk drawing was an attempt to promote agape.

In my article ”APU’s LGBTQ Crisis,” I discuss the steps and missteps of a school dealing with gay activists.  The LGBTQ crisis at Azusa Pacific University resulted in negative publicity in conservative media — the media that reaches many of their prospective students. This crisis also exposed evidence of broader mission drift in specific departments.  In that article, I urge Christian colleges to recognize that similar challenges are going to come to their campuses.

I also wrote in that article that “Gay activist groups are interested in partnering with gay students on your campus. These groups have a ‘wonderful plan for your school’ (my apology to the Four Spiritual Laws tract).”

In my article, ”Christian Colleges MUST Teach About Homosexuality:  Here’s Where to Start,” I address our responsibility to teach in an area where young adults lack a Christian worldview. Instructing Christian college leaders that they should be teaching on a major issue facing the church should be too obvious to mention. But, alas, we have been ostriches.

When Christian young adults have their views on SOGI more shaped by their peers than by the Bible, we can take that as a commission, a calling, a duty to include teaching about it. In this article on teaching about homosexuality, I suggest introducing students to SOGI issues by assigning a book in a general studies class taken by all undergrads.

For those who want to learn more, and hopefully for some students who will minister to those with SOGI issues, I recommend developing a more extensive elective.

In former articles I discuss 1) activists and 2) that we need to teach our students, especially heterosexuals who can learn to help their churches find their way.  In this article I address helping a Johnny.

Shepherd the SOGI Students on Our Campus or Leave Them to a Community of Wolves?

Do they want our help?  In Love is an Orientation, Sam Marin tells of being shocked when three of his friends came out of the closet.  Feeling a calling to minister, he began going where gay people openly meet.  He acted as a friend and gays responded in like manner.  A lesbian asked if she could attend the Bible study he was teaching in his dorm.  She liked it.  She brought friends.  They brought friends.  This got a little weird for the straight people, who quit coming.  But Sam ended up teaching Bible studies all over Chicago and launching a non-profit ministry.

One day, two of the men came to him after Bible study.  They told him that they had decided to quit the gay church and make Sam’s Bible study their church.  When Sam asked why, they explained that at the gay church they just learn about gay-affirming interpretations of passages related to their SOGI issues.  But Sam was teaching about what Jesus taught.

Yes, there are same-sex-attracted people who are hungry for the teachings of Jesus.  Does that mean we don’t teach repentance of same-sex behavior?  Do we have to inspect every church visitor for adequate holiness before we will teach them about the friend of tax collectors and sinners?

So, what do we tell a person who truly wants to walk with God, but has SOGI issues?

I would especially recommend two books not on that list:

In Gay Girl, Good Girl [iii], Jackie Hill Perry is poetic and profound. Her testimony is full of theological and personal insights into sexuality, homosexuality, gender, and the struggles in leaving the gay life for the God who she realized loved her more.  Between such vivid imagery and outstanding writing, this story of redemption is hard to put down. Because of the deep insights and excellent writing, it has become my first choice as the book to assign students as a starting point in a discussion or to a gay person who is considering turning to God.

In Washed and Waiting,[iv] a gay man, committed to Jesus Christ, who determined that the two God-honoring expressions of our sexual nature are heterosexual marriage or celibacy, describes his journey with great openness and vulnerability.  This book is a useful resource for a same-sex attracted person who wants to follow Christ at any cost.  It is also another excellent resource for helping heterosexuals understand a brother’s or sister’s struggles and perhaps minister to them.

What do we tell a seeker who does not lose his or her illegitimate desires?  We answer that there is a cost to discipleship. We all pay the cost of learning to manage our sexual behavior, thought life, and eyes.  Consider a widow, a person who never marries, a person before he is married, and even a married woman who wakes up to the reality that her marriage is not the same as the idolized dream of marital bliss she had when she was blissfully ignorant.

When I came to Christ, I had to stop sleeping with my girlfriend. I had to give up sex.  But, even when I was single, I had hope of being married someday. How much respect I feel for a faithful Christian who, although having homosexual desires, lives a holy life without the hope of ever being married. “If the church continues to believe that deep spiritual maturity can only come with a change in orientation, then we will be waiting forever for those people who are trying to change but can’t” (Yarhouse 2010:54).[v]

A major issue for a person with same-sex desires is how to understand oneself in relation to same-sex attractions.  Yarhouse explains in his book Homosexuality and the Christian, the importance of finding one’s identity, not in their sex drive and in the gay community, but in Christ and the Christian community. Teenagers and young adults often try on different identities until they find one that fits. In my younger years, I tried being a brain, a jock (very unsuccessfully), and settled on being a long-haired hippie.

Sam Alberry, in his book, Is God anti-gay: And other questions about homosexuality, the Bible and same sex attraction[vi],points out that his love of meat does not make “carnivore” the core of his identity. When a provocatively dressed woman walks by, I sometimes fail to discipline my thoughts, but I do not make “adulterer at heart” the core of my identity.

In his 2010 book, Yarhouse describes this process as the adopting of scripts. For example, the gay community offers a script such as this:

Yarhouse proposes a script that is more appropriate to a same-sex-attracted disciple of Christ:

SOGI Students on Our Campus: What Do We Do?

Have we been so focused on activists that want to push us into positions we cannot accept, that we miss offering a hand of help and healing to lost sheep who must do their crying privately, alone, and without help from the community of God’s people?

We have to take the first step.

These lost sheep are wary of approaching us for help. Telling anyone at a Christian institution about their attractions is like navigating through icebergs.  They have seen how the people at church offer no help.

In Jackie Hill Perry’s Gay Girl, Good God, we read, “I have not always been in love with how the Church has loved the gay community.”  Christian colleges and graduate schools are the ideal place to equip those who will assist the Church to make a place of ministry to gays.  Young adults are less freaked out by people with same-sex desires than was my generation.  So, here are a few concrete suggestions:

Dr. Agron will be teaching a related workshop at the annual meeting of the Association for Biblical Higher Education. The workshop is entitled “Handing Sexual Identity Issues with Compassion & Understanding.” It will be offered on Friday, February 22, 2019 at 1:30 in Salon 12.

[i] Yarhouse, Mark A., Dean, Janet B., Stratton, Stephen P. and Lastoria, Michael

2010      Homosexuality and the Christian: A Guide for Parents, Pastors, and Friends. Minneapolis, MN: Bethany House Publishers.

2013      Is God anti-gay: And other questions about homosexuality, the Bible and same sex attraction. Epson, UK:  The Good Book Company.