Six Months into the New Administration: What’s the Prognosis for Higher Education? 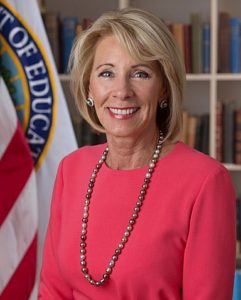 What will change under U.S. Secretary of Education Betsy DeVos?

“Whenever there is a transition to a new president and new political party, there is always a delay in new policy guidance and development, as a new administration makes its plans and chooses its leaders for the tasks ahead.”  Harry S. Weber

At the U.S. Department of Education, the prior and current administrations seem to agree on the objective of “taking care of students first” but with strongly opposing views on how to accomplish that noble goal.

While the new Secretary of Education, Betsy DeVos, cares about students, the vast majority of her career focus has been in elementary and secondary education with little to no experience in post-secondary and higher education.

That is not necessarily a negative, since an effective leader will depend upon her team of subordinate leaders to advise her on higher education policy. But that is where a second and very real problem lies:  several key undersecretary leaders have departed the Department leaving a bit of a leadership vacuum.

While new leaders have been appointed, it takes time for them to learn the intricate policies and systems involved with the administration of the federal financial aid programs.

With significant political differences between the previous and new administrations, we are sure that the most significant unanswered question on the minds of the Department of Education bureaucrats is “Where are we going, how, and when?”

We have reached this conclusion not by hearing the opinion of any one person at the Department of Education but by observing the level of inaction on new issues and resolution of old/existing issues at the Department.

In the past, regional representatives could answer most questions quickly and clearly.  But now technical questions are required to be submitted to the Washington office, which delays answers by weeks to months, thus failing to achieve the goal of “taking care of students first.”

Beyond that, it is our belief that the status quo will be the order of the day until the goals and objectives of this administration with respect to Postsecondary and Higher Education are more clearly stated by both the President and Secretary and leaders become familiar with the systems and intricacies of the education system.