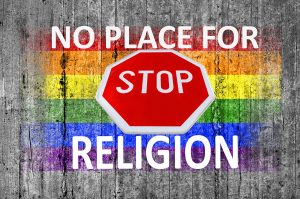 Has SB 1146 been stopped, or will Sacramento stop the availability of Cal Grants to schools that do not agree with the values of California’s political class?

Christian higher education in the Golden State dodged a major bullet last year in the form of targeted legislation posing an existential threat to religious liberty.

Early versions of SB 1146, if enacted, would have marked the beginning of the end for biblically-faithful Christian colleges and universities. Initial versions of this religious-freedom-stripping legislation, dubbed the “Armageddon bill,” would have cut off Cal Grant funding for poor students choosing to attend religious schools and would have allowed students to initiate financially crippling lawsuits against Christian institutions for perceived LGBT discrimination—essentially for committing the thought “crime” of upholding biblical sexual ethics.

SB 1146 was authored by Senator Ricardo Lara, an openly gay man, and was sponsored by Equality California, an organization advocating the radical LGBT legal agenda.

Fortunately, after a strong unified Christian opposition organized and coalesced, the final version of the bill only required religious colleges to notify prospective students and staff that the institutions claim exemptions from Title IX.

We at the National Center for Law & Policy were proud to serve as a part of the broader team. You can read our May 2016 alarm-bell-ringing article California to Christian Colleges: Bow to the Idol of Sexual Liberty, or Perish!, warning the church about SB 1146.

In a 2016 interview in the Los Angeles Times, Senator Lara indicated that he would pursue other legislation the following year, possibly including the provisions that were dropped from SB 1146. As a result, religious legal and public policy organizations have been vigilantly watching 2017 legislation as it has been rolling out in Sacramento over the past several months.

Thus far, no legislation mirroring the worst provisions of 1146 has been proposed.

Currently, the biggest concern is proposed AB 888, a bill sponsored by LGBT Caucus member Assemblyman Evan Low (D-Silicon Valley) requiring private colleges receiving Cal Grants to report expulsion statistics to the state, including situations where LGBT students are disciplined. The bad news is that AB 888 would allow the state to keep a close watch on private religious institutions, giving the government statistical ammunition that could be used in future assaults on Christian higher education.

I believe that part of the strong response last year is due, at least in part, to the stark realization that if they can come after religious colleges, the church, pastors, and pulpits are next.

Although we enjoyed a miraculous victory last year, this is not the time for the body of Christ in California to rest on its laurels. Freedom isn’t cheap or free.

Eternal vigilance is indeed the price of liberty.

The church must, like watchmen on the walls, continue to wake up and stand up for religious freedom.