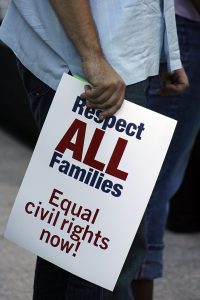 For the past 10 to 15 years, those pushing the radical LGBT agenda, with the aid of the cultural elites, have been disrespecting and misinterpreting the U.S. Constitution, including the First Amendment, and passing law after law that seeks to marginalize, silence, and demonize religious dissent, especially biblical Christianity. This did not begin with SB 1146.

The latest targets are religious colleges and universities in California.

The Lambs Leave Their Pen

In 2016, less than a year after the Obergefell v. Hodges U.S. Supreme Court ruling that gave same sex couples the right to marry, SB 1146 placed California’s religious colleges and universities on the cultural chopping block with the axe poised to fall.

But this time, the lately listless Laodicean church was not asleep, nor was she silent. Beginning in April of 2016, we at the National Center for Law & Policy were an early active member of an initially very small band of civil rights groups opposing the bill.

Among other actions, we submitted opposition letters to Senate and Assembly committees considering the bill. We helped craft talking points and strategy against SB 1146. And I provided live testimony before the Senate Judiciary Committee.

I also wrote an Op Ed exposing and opposing SB 1146 and AB 1888 (California to Christian Colleges: Bow to the Idol of Sexual Liberty, or Perish) in early May, which was published by Christian Academia Magazine.

While we were vocally opposing the bill, others tried to appease SB 1146’s author Senator Ricardo Lara, a homosexual who is unapologetically advocating for Equality California, happily pushing the radical LGBT legal and public policy agenda.

For months, Lara refused to budge during negotiations. Why should he? His radical freedom-crushing bill was virtually assured passage in uber-liberal Sacramento.

The California Legislature is poised to consider legislation that could destroy the ability of numerous faith-based colleges and universities to pursue the mission for which they were created,” wrote pastor, author and speaker Ed Stetzer on his June 24, 2016 Christianity Today blog, the Exchange: California’s Religious Liberty Moment-Coming to a State Near You.

Stetzer was soon joined by Christian author Eric Metaxas on his June 27, Breakpoint broadcast A License to Discriminate: California’s Assault on Christian Colleges, who called the SB 1146 “a license to discriminate.”

Each of these roaring lambs understand that religious freedom is our “first freedom,” and that it includes honoring religious liberty for individuals and institutions. Until SB 1146, legal precedent backed their beliefs.

SB 1146 Requirements: Before and After

Through legislative action, SB 1146 tried to destroy these constitutionally-valid protections. As initially drafted, the bill would have required religious schools to choose between the following:

This initial version of the bill only exempted the narrow parts of Christian colleges or universities involved in pastoral training (i.e. seminary)—but not the entire school. If a Christian school included a seminary, it would only exempt and protect that department from financially-crippling lawsuits, including damage awards and court injunctions—the rest of the college or university would be vulnerable.

Later, a barely-softened versions of SB 1146 would have forced Christian schools to accommodate transgender students in housing, restroom, and locker room access. It would have allowed same-sex couples to participate in married housing. It would have allowed Christian schools to be sued for injunctive relief, but not financially crippling damages.  Religious colleges would have to provide details of student expulsions to the California Student Aid commission (CSAC).

But with the help of California’s bold and courageous roaring lambs rising up, religious liberty scored a victory.

By God’s favor and grace, the existential threats of Cal Grant loss and LGBT anti-discrimination lawsuits were removed. The pressure to compromise biblical beliefs and practices was thwarted. In fact, the only relevant provision remaining in SB 1146, as signed by Governor Brown on September 30, 2016, is a provision requiring religious colleges to notify students and staff about the institution’s religious beliefs and practices. Religious colleges and universities have until the fall of 2017 to implement the stripped down law.

Roaring Lambs Must Continue to Unite

Many Christian colleges presidents and counsel for these institutions stepped up and worked very hard to defeat SB 1146, including funding and forming lobbying organizations in the final weeks of the battle. The organizations who worked in unity with the Christian schools to achieve this reprieve include the Alliance Defending Freedom (ADF), National Center for Law & Policy (NCLP), California Catholic Conference (CCC), California Family Council (CFC), The Church State Council (CSC), and others.

Putting aside our own agendas and egos and humbly working together in Christian unity won this victory for religious freedom. As the good book affirms:

“Though one may be overpowered, two can defend themselves. A cord of three strands is not easily broken.” (Ecclesiastes 4:12)

Yet, we dare not rest on our laurels here. Senator Lara ominously warned the Los Angeles Times that the gutted provisions of SB 1146 may be revived and reincorporated into future bills.

Oh, that more of the church of Jesus Christ would get a spiritual spine and rise up as roaring lambs!

This win must encourage us to fear God more than we fear man; to be active, not passive; engaged, not disengaged; and vocal, not silent in the face of increasing imminent threats to religious freedom.

Many speak of tolerance, but tolerance today is a myth—the biblical Christian worldview will not be tolerated in this world.

Pastor Dietrich Bonhoeffer wrote, “Silence in the face of evil is itself evil: God will not hold us guiltless. Not to speak is to speak. Not to act is to act.”

The time to speak and act is now.

Bonhoeffer also wrote that “the ultimate test of a moral society is the kind of world that it leaves to its children.” We must stand firm and refuse to leave our children with an impoverished and immoral America, religiously cleansed of Christian influence.

We must resist the spiral of silence’s siren song, continue to speak the truth in love, and continue to engage in righteous acts in the cause of freedom. United we stand; divided we fall.

What will you do?

Please join me. We wield incredible dynamic power if, under the control of the Holy Spirit, we are united in Christian truth and love.

Biblical Worldview Series: Restoring God's Design for Manhood
From Danbury to D.C. – The Role of Government in Today’s Christian Colleges
A Modern Disputation: Gender Identity & Personal Freedom
How Federal Regulations Could Reduce Faith-Based Worker Supply as It Has Already Done to Health Care...