In a recent faculty discussion of diversity, a professor of social ethics expressed disappointment that his students, having finished his course, had not come to the conclusion that the Iraq war was unjust. Let’s unpack this. 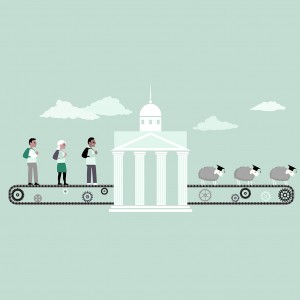 Translation: the parents of these students have been doing a miserable job of preparing their children for polite and civil society, and we have to completely reorient them, as soon as possible.

First, he seems to believe that the justness of war is related to the discussion of diversity. How would that be, exactly? What relevance does the justice or injustice of a particular bit of foreign policy have to do with diversity at his university?

It’s clear that in his mind, diversity and general leftist thought (e.g. U.S. wars are unjust) are very much related, and since the discussion is about diversity, the floor is open to general leftist discussion. He thinks he is at ideological home with his fellow travelers. He has done this before, almost certainly, and been well-received. This seems more and more common at even some drifting Christian universities, but especially at secular universities.

Second, he seems to believe that no other position on the matter of the Iraq war can possibly be held by a rational person, in possession of the facts, with a decent heart and Godly intent. So his disappointment makes sense, in his very constricted world-view.

Third, he seems completely unaware that he has just hurled a deadly insult at the parents who pay his salary; it is likely that his students reflect some of their parents’ perspectives on such matters, and he thinks those perspectives are morally and rationally indefensible. To be blunt, he sees his job as taking parents’ money to teach their children to think that their parents are fools, or worse.

Yet there he is, in the middle of a discussion of diversity, knowing that heads around the table will nod sagely as he fires from the hip, without really having a target, other than those benighted souls of the world who do not subscribe wholesale to leftist thought. Plenty of heads nodded, as if the comment were perfectly appropriate. He is a perfect example of what has been happening in higher education, as we bring in more and more faculty who are so thoroughly indoctrinated by the Left in their graduate programs that they see themselves as being on a mission from God to disabuse undergraduates of their foolish traditional misconceptions.

Translation: the parents of these students have been doing a miserable job of preparing their children for polite and civil society (as defined by the Left in secular academia), and we have to completely reorient them, as soon as possible.

Woe is the Christian university that hires such professors.

Dr. Phil Shackleton is the chair of the Musical Studies at Azusa Pacific University. The above article has been updated from its first publication on his blog.