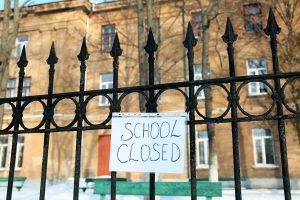 The progressive agenda may not always clearly communicate what it is for, but when it comes to what it opposes, the evidence is everywhere.

Exhibit A includes recent aggressive actions against religious and conservative organizations—including educational institutions—at the hands of federal, state, and local officials. Refuge in the judicial branch appears to be a false hope as, sadly, much of this persecution and bureaucratic overreach has been upheld by the courts.

This was just evidenced in Justice Neil Gorsuch’s recent dissent over a church rights case in Nevada, where he wrote that “there is no world in which the Constitution permits Nevada to favor Caesar’s Palace over Calvary Chapel,” but five of his colleagues upheld the state action nonetheless.

Exhibit B includes past regulatory aggression in higher ed that might be a prologue for future attacks on religious educational institutions.

Perhaps the COVID-19 crisis could not have been avoided in America, but more health care workers would certainly have softened its negative impact.

According to the Bureau of Labor Statistics (BLS), for many years now, health care occupations have been projected to grow. Most recently, the BLS forecast 14 percent growth from 2018 to 2028, much faster than the average for all occupations, adding about 1.9 million new jobs—more jobs than any other occupational group. This is consistent with both past projections and historic realities of employment in the health care sector.

Educational supply of workers met the health care demand caused by an aging population and expanding insurance coverage through 2012. The National Center for Education Statistics (NCES), the primary federal entity for collecting, analyzing, and reporting data related to education in the United States and housed within the Department of Education (ED), reports that associate’s degrees in the health professions and related programs peaked in 2012 at approximately 220,000 graduates.

While some of this decline in graduates can be attributed to a slowly growing economy that enticed students into the work force, the 2012 timeframe is also significant for its active regulatory environment.

The Writing on the Wall: How Federal Regulations Reduced Health Care Worker Supply

For example, the HEA’s legislative “gainful employment” language, long interpreted to mean “getting a job,” was redefined by bureaucratic fiat to an amorphous formula involving tuition, debt, and “discretionary income.” However, this new definition was selectively applied to private proprietary schools—for-profits in the language of the day—but not to public or private non-profit institutions.

It was also not applied to institutions serving large populations of students with Department of ED persistence risk factors which had similar, or worse, outcomes when compared to proprietary schools, as was highlighted in independent studies such as a 2010 report by The Parthenon Group (now part of EY).

The Parthenon report examined ED data and found that in two-year and shorter programs, “most private sector providers do a better job graduating students, delivering superior income gains, and do so at a societal cost comparable to public institutions,” with “a graduation rate nearly 20% higher and 7% higher graduation and transfer rate.” The report also found it “particularly compelling” that “positive outcomes were higher for Pell Grant recipients, first-generation post-secondary students, and minority status students.”

Despite objectively better outcomes, this regulatory assault on a significant engine of health care education was combined with politicized investigations and judicial charges at the state and federal level. The accusations focused on highly publicized allegations of misrepresentations related to outcomes disclosures but not to educational quality, especially not in nursing programs.

The multi-headed attack had its intended effect: the NCES reports following the 2012 peak showed a proprietary school enrollment decline of 51% by 2017. While the impact was especially intense in California, New York, Illinois, and Massachusetts, nationally nearly 1,300 proprietary institutions (over 80% of what once existed) have closed their doors since 2014.

This constriction in educational supply appears to be directly, and negatively, impacting our current shortage of healthcare workers.

To quote a useful adage: there are no solutions, only tradeoffs. Whatever one’s position on education reform, closing hundreds of higher-education institutions results in a tradeoff for skilled workers—especially when you most need them.

2020 will be forever marked by a medical pandemic, but the U.S has been in a spiritual health crisis for decades, which could very soon reach pandemic proportions. It does not require an active imagination to envision an environment where the supply of pastors, missionaries, ministry leaders, charity workers and lay-pastors in the workplace has been decimated by the closure of hundreds of additional faith-based schools.

Four years may seem like forever ago, but we must not forget the events of 2016 that laid the groundwork for future attacks against faith-based schools.

These included, the Obama/Biden administration’s ED/DOJ Dear Colleague Letter that eradicated the concept of birth-sex for educational institutions and their related publication of all schools’ Title IX religious exemption requests, in an attempt to isolate these schools as outliers within the higher ed community.

We must also remember that during this same period, New York began the process to give public school boards oversight of private religious K-12 schools, and California came within two votes of defunding religious colleges from participating in the Cal Grant program.

If one sector of higher ed can be all but eliminated based on ideological differences, it can happen to any.