California to Christian Colleges: Bow to the Idol of Sexual Liberty, or Perish!

The National Center for Law and Policy, a non-profit 501(c)(3) legal defense organization, engages in constitutional litigation in state and federal courts. The National Center is active in the areas of public policy and education.

Religious liberty is on the political chopping block in California.

We have been warning Christians that the radical LGBT agenda’s goal is not to embrace diversity and peacefully coexist in a harmonious state of inclusive tolerance with Biblical Christianity. Their goal is simply to force us to adopt and embrace their vision of radical sexual liberty or to silence us completely—period. We predicted they would first target Christian businesses, would next attack Christian ministries and educational institutions, and finally finish off churches and pastors. I wish we were wrong!

California’s assault started several years ago when California adopted Education Code § 66250 et seq. (the Equity in Higher Education Act), which mandated colleges and universities not discriminate on the basis of “gender expression” and “sexual orientation.” However, as is true with similar federal laws, California’s religious colleges could claim a broad institutional exemption if the application of the law would not be consistent with the religious tenets of the organizations. But the golden state’s far-left legislature did not wait long to tighten the noose around the necks of Christian Colleges.

In early 2016, AB 1888 was introduced. This horrific legislation seeks to cut off state and federal funding of Christian colleges by requiring all institutions participating in the Cal Grant program to certify they will not discriminate with regard to students or employees on the basis of sexual orientation, gender identity, or gender expression. It would also prohibit current Title IX waivers from the US Dept. of Education if the college participates in the Cal Grant program.

SB 1146, following closely on the heels of AB 1888, has the potential of effectively “finishing off” faithful Christian colleges and universities, even if they opt out of federal and state financial aid. This draconian legislation would radically narrow, if not destroy the existing exemption for religious institutions. If this bill passes, only schools controlled by religious institutions could claim a religious exemption, but only narrowly, essentially only protecting for their religious study’s departments (ministerial or theological training programs)! When read in conjunction with existing legislation, SB 1146 coerces religious colleges to choose between keeping their financial aid and abandoning their religiously rooted personnel and student policies. In other words, bow or die!

Many Christian colleges are pervasively religious—because faith and learning are fully integrated in all subjects. Indeed, the scriptures declare that, in fact, everything is religious or theological, “The earth is the LORD’s, and everything in it, the world, and all who live in it….” (Psalm 24:1 (NIV)). Therefore, trying to make clear distinctions between the secular and sacred at these institutions is both a very foolish and invasive effort. But SB 1146 gives judges the power to pierce the existing religious bubble of protection, inquire into the various programs at Christian colleges, decide what programs are “religious,” and allow lawsuits to proceed and injunctions issues to stop or control activities deemed sexually discriminatory.

Among the parade of hypothetical horribles, SB 1146 would conceivably allow a biological male, who subjectively believes he is a girl, to sue a Christian college that insists he reside in the male dorm—to sue for gender identity “discrimination” be awarded damages, and obtain an injunction ordering the school to allow him quarter in the girl’s dorm, bathrooms, and showers. This would allow a professor, living with his or her same-sex partner, to sue if terminated. 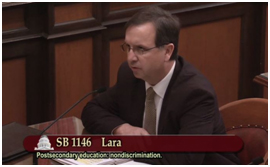 Will the CA legislature cut off financial aid? The NCLP is actively involved with a broad coalition of California and national organizations working to stop AB 1888 and SB 1146. NCLP Chief Counsel Dean Broyles testified against SB 1146 at the Senate Judiciary Committee in Sacramento on April 19, 2016.

The attempt to cut off state and federal funding to Christian colleges, granting the “right” to sue and financially cripple institutions, and obtain injunctions to curb “discriminating” religious decisions may be the beginning of the end for biblically faithful Christian colleges.

These egregious bills are the latest example of sexual liberty steam-rolling and crushing religious liberty and are an existential threat to Christian colleges and universities. If we can’t stop them here in California, they may be soon coming to a state near you. These institutions are essentially being told: either bow to the new American idol of sexual liberty, or watch your institution be “legally” burned at the stake. This is not a choice, this is tyranny.

These bills are another example of sexual liberty crushing religious liberty and are a direct existential threat to Christian colleges, attempting to force them to embrace the LGBT agenda, even if it contradicts sincerely held religious beliefs and rights of conscience.

Join us on December 14, 2022 for helpful advice on how to protect religious freedom on the Christian campus. Click here or on the image below for more info. 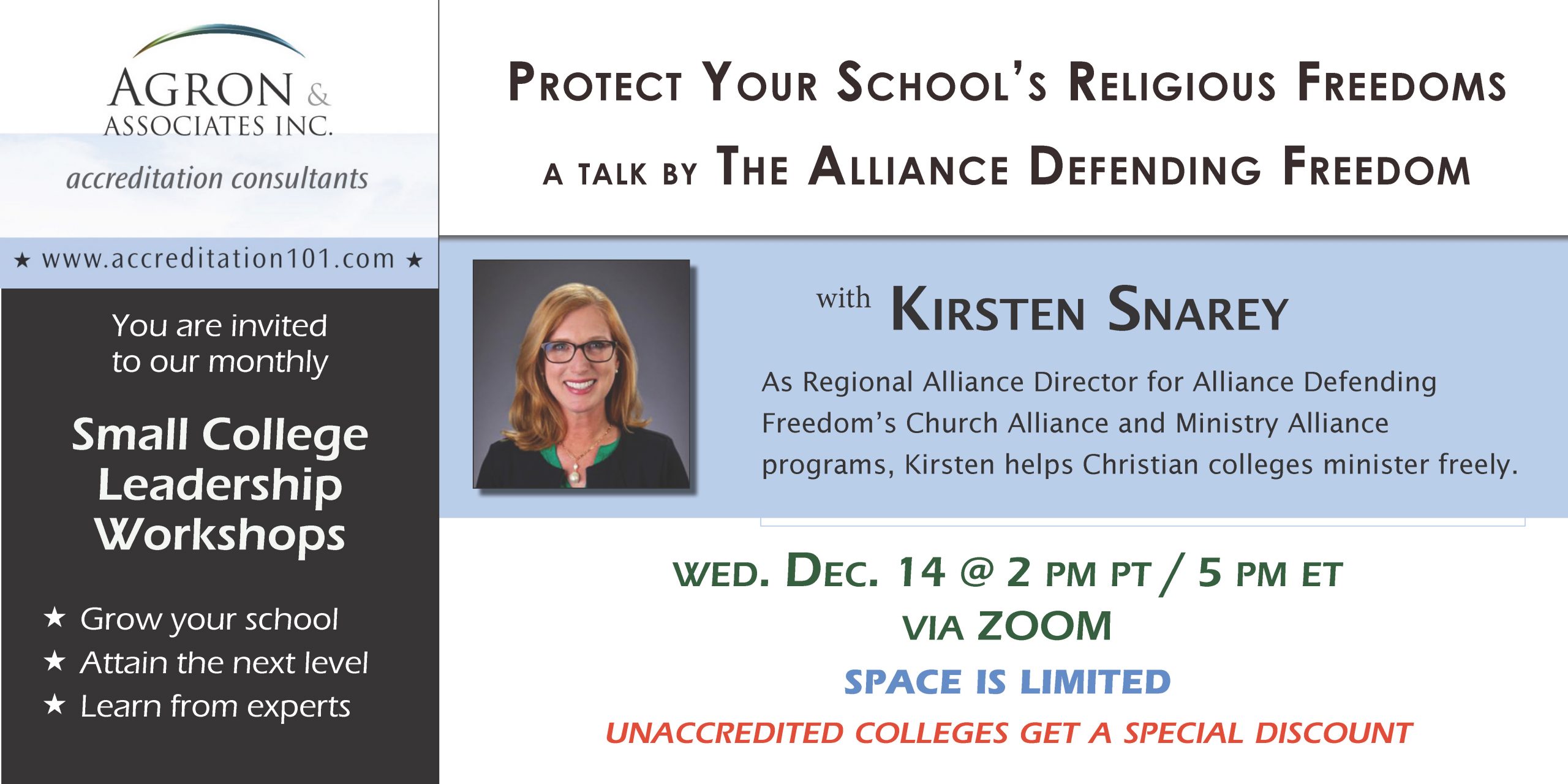 A Modern Disputation: Gender Identity & Personal Freedom
Biblical Worldview Series: Restoring God's Design for Manhood
How Federal Regulations Could Reduce Faith-Based Worker Supply as It Has Already Done to Health Care...
From Danbury to D.C. – The Role of Government in Today’s Christian Colleges